Soundtrack to The Bruja 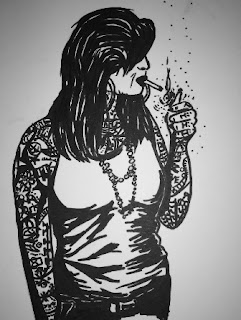 When I write, I tend to listen to music.

The music that I listen to almost always is intended to set a mood, or tone, for a particular chapter or scene. Sometimes I might just want some background noise to occupy me, but often I attempt to create a cinematic experience. It's my belief that the right song at the right time will create a tacit change in the emotional impact of what I write. I keep a listing of these "soundtracks" when I write, mostly so I can back and utilize the same music when I re-write or edit a certain section or chapter. This creates continuity.

I thought I would share the final soundtrack I used when The Bruja entered its final re-writes in mid-2016. I do not own any of this music, nor do I imply ownership. This is simply a point of reference that I thought you would enjoy. I hope that you will listen to some of these bands, and perhaps become a fan. Scene descriptions kept vague to avoid spoilers.