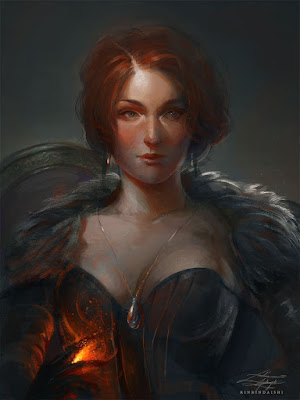 
“Are you,” the boy pauses, flexing a fist, thumb knuckle popping, “a witch?”

The two children couldn’t have been older than fourteen. The girl is scrawny, her shoulders are misshapen, and one clavicle is slouched down. Her fingers are black, sooty, and her broken nails grind into a lump of charcoal. She scratched at a concrete wall, sketching flurries, sweeping lines in monochrome. A spiral of flames, pressed and pulled by opposing winds.

“So,” the boy flexes his fist again, “can you read my mind?”

“Kind of,” the girl nods a second time, “I know how you feel. I know if you’re afraid, or if you’re happy. If I touch you, I can see pictures.”

“I’m not afraid!” the boy blurts out, hands pressed to the floor. There are layers of carpet, woven thin, underneath both children. Each one is a conflicting color or pattern, dusty with age and wear, and covered in debris. Small twigs and pebbles, crumbs and broken shards of coal.

The little girl stopped. “Yes, you are.” Her auburn-red hair tied back in a ponytail with a long strand of paracord that fell down her back. When she nodded, it would bounce about her faded sweater.

The boy knew this was his ruin. His chin tipped down and his eyes turned murky with all the drama that a child could leach from such a moment. He had nothing to hide behind, no tough exterior, no biting fury or savage bravery to offer. He was, instead, exposed and naked in front of the girl. All the words in the world could not hide his cowardice.

The girl turned from her umbra flame. She watched chapters of emotion flow across the boy’s face, before she laid the charcoal down, “I know you’re sad. But I don’t know why. Why are you sad?” What was the boy to tell her? Because pretty girls don’t like cowards. Before he could open his mouth and stammer out a denial, the girl answered; “You’re not a coward. A coward would run away. A coward wouldn’t come to my home.”

The boy had spent much of his short life working to be brave. He knew that he could hide fear with noise. He could speak louder or yell. He could even shout orders to the younger children and they’d never know desperate his fear was. The little girl with black paracord in her red hair was defiling that notion. Ripping up his rulebook, laughing in his face.

It seemed that this was as good a time as any. “I think you’re pretty.” The boy manages to get the words out. What did it matter now? Why wrap up his thoughts inside his ribs where no one could find them? This girl clearly could.
“I’m going to touch you, okay?” The girl leaned sideways on her hip, braced one dirty hand to the rugs and reached for the boy.

The air in the girl’s room was thick and musty. Sharp with unwashed clothes and the early stages of adolescent pheromones. He pulled away, causing her to pause, with a hand suspended mid-stretch, “Why?”

“Because you think I’m pretty.” The girl said this as though it was the most obvious answer in the world. It was as if someone had reached into the boy’s heart, crawled up his throat and wrapped his mind in warm blankets. The girl reached forward, her weight shifting, and she came up on her knees. Her fingers are lithe, covered in scabs and scratches under charcoal stains. With care, she presses those fingers into the boy’s forehead and her flesh makes full contact with his face.

Daniel Hasgard knew his parents had died in a plane crash, the day before the Collapse. His uncle had told him the details, something about a bomb. He didn’t remember, it was easier to forget. All he knew of that day was the way his polyester comforter felt after it was hot with tears and snot. Printed in deep blue skies and cartoon airplanes, it felt like a betrayal. He ripped them off the bed, throwing them as far as he could. The sky wasn’t harmless. It had killed his mother and father.

Part of her mind trickles into Daniel Hasgard’s skull. The tap left to dribble across dirty dishes in a brimming sink. Her mind is exactly as black and sooty as her charcoal sketches, wrapping around his memories. She can’t take his pain away, she can’t erase his sorrow or his loss. She can only dull it, as she had dulled his fear a moment earlier. She can make him comfortable. Give him a respite against the storm and a moment where he was free of his need to be the tough guy. Here, alone with her, he was safe.

It's only us, the girl speaks in Daniel’s mind. I won’t let you get hurt if you’re this close to me. Daniel felt as if he was floating in that same cartoon sky of his polyester sheets. It didn’t make him angry now, it felt peaceful and warm. As warm as the little girl’s palm pressed into his face. He knows she’s kissing him, and he doesn’t mind.

The girl pulled him close. Blackened fingerprints cover his skin and clothes, even his dusty blonde hair. Each charcoal stain is an impression. Leeching under his skin, turning his veins the color of night. They bind him closer, as her mind continues to expand across his memories. His loves, his favorite foods, and most hated chores.

The girl, lost inside Daniel’s mind and memories, had never heard the door of her room unlatch. Yet, slamming shut, it broke her focus. The severance was violent, and she couldn’t protect Daniel anymore.

“What the fuck is this shit?"

The girl’s mother is slim, with a hawk nose and deep, black eyes. Her ill-kept hair spills across a tank top that exposes layers of colorful ink across her skin. In one hand she’s holding an unmarked glass bottle, quarter full of brown fluid.

“Maggi!” the boy shouts, pulling away. He knew who this woman was. Everyone knew who she was. “I’m sorry, we were only talking!”

The little girl stands quick. She can hear her mother’s words before she speaks them. It creates a disjointed echo in her mind, “Only talking,” Maggi yells, “Don’t lie to me you toe-head fuck!”

The boy is getting ready to stand, holding his hands out, sputtering and spitting. His terror is a tangible animal in the room, it flits and squeaks like a hare cornered by a mountain lion. The little girl with her paracord hair tie doesn’t blame him. She can see the air bubble and bend around her mother’s fingers, she knows what that means. She’s going to burn him, she’s drunk enough right now to burn him alive.

Maggi was pulling from the world around her, borrowing flame, summoning it to her free hand. The magic had no odor, yet smelled of burning flesh, peeling, and twisting muscles. She wanted to throw up.

When her mother was this angry, there was no way she could reach into her mind. Her mother would know, it would rattle her, shake her concentration. That was enough to break focus from Daniel and quiet the fire that Maggi could command.

In an instant the older woman with dark eyes tipped her head to one side, favoring the little girl. A look of betrayal darts across her face, lips part in a snarl and a narrow trail of drool escapes to her chin. Daniel was a smart boy and used this opportunity to stand and bolt out of the room. He’s not fast enough, and his left shoe catches on the rugs, almost tripping him. When he steadies himself, the girl’s mother raises her left hand, swinging the bottle down to strike.

Although the little girl with paracord in her hair owed Daniel nothing, she jumped up. She’d seen too much of his mind to not care. She wouldn't break her own promise, she would protect Daniel. Even if that meant placing herself between him, and her enraged mother.

The bottle of alcohol strikes the little girl square on the side of her head. The glass is thick, and when it shatters it covers her in pungent decoction. Broken shards rain, falling down her shirt, spate in her auburn red hair. The last thing she saw was Daniel fleeing the room. It was all she wanted, she’d given him safe passage, after all. She’d told him that her mother wouldn’t be home, the witch that he feared most. The witch everyone feared, Maggi Lopez. The Bruja.

“Who the fuck was watching Alexander while you played tongue-twister?” Maggi yells at the little girl who’s pulling herself up off the rugs. Maggi has none of it, landing an open palm down on the back of her head. Hard enough to create an echoing thump in her skull.

“One fucking week I was gone,” Maggi yells, her voice husky and sharp with a clipped tone. She shortens all her vowels and bites hard into each question, “I can’t always fucking be here. I have to fight with our troops, and I trusted you with my fucking son.”

A second time Maggi strikes her with an open palm. This time it hits the girl’s face, raising a warm glow from under her flesh. Maggi's rage filled the room, acrid and smoky, suffocating. The little girl could block it out, but now her own focus had evaporated.

“How dare you abandon my son!” Maggi shouts, striking the girl again. The contact with her mother’s flesh was like a knife sliding under the skin. Prying away at a splinter, wriggling around and bracing nerves. Maggi was always a heavy drinker after she fought in the field. She always tasted of bitter medicine and loathing, returning home.

The little girl doesn’t answer. Her yelling slipping out of English and into español, but the little girl was no longer listening. Only after her catatonia became clear did Maggi fall quiet. When she spoke again it was a growl that slipped from her throat. It didn’t matter how drunk she was, she didn’t slur, or fumble, she communicated her point with precise hatred. “I swear to fuck Margaret, I should have fucking left you in that parking lot seven years ago.”

Maggi stormed out of the room, slamming the door behind her. Margaret didn’t pull herself up off mismatched rugs that had worked so hard to trip Daniel. She lay there, still. The blood at her lips was darkening black, scabbing, and one of her eyes had begun to swell. Maggi could hit hard.

Margaret wouldn’t have cared if her mother had beaten her every day, if only she would never say those words again. I swear to fuck Margaret, I should have fucking left you in that parking lot seven years ago. It was extravagant wish at the core of her chest, pulling and pulling until she felt her organs might rip art.

It was an irony, of course, that Margaret could ease the pain of others, but could never console her own. The best she could do was retreat to a lumpy mattress and pretend that this had never happened.