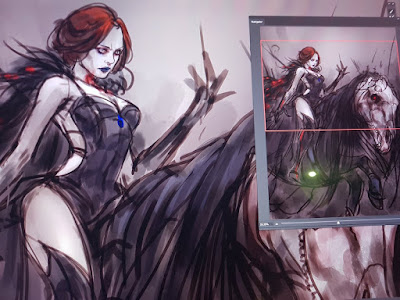 At the end of "The Bruja," I promised that "Mayhem," would be forthcoming in late 2018. I may have gotten a little carried away with that, as early 2019 is a more likely release date.

This summer, following the release of "Dread Harvester" in May, I launched into the last major re-write for "Mayhem." All writers have their own system, their own scope of work production. I don't mess around with "edits" until I consider the core product complete, and I think multiple cover-to-cover re-writes are the key to that. I think a lot of green authors get caught up in the idea that their work is somehow finished after the first draft, they just need to "clean it up a bit." We each create with our own methodology, but there's no substitute for hard work.

"Mayhem" is roughly 50% re-written as of last night, September 11th. The original work of fiction was roughly the same length as "The Bruja," about 300 pages. The scope of the story does not allow for that short of a read, however, and the final version of "Mayhem" that you're likely to hold in your hands will be between 450 and 500 pages. I'm intimidated by that length because a lot of pages means a lot of content and copy editing, and a lot more things that can go wrong.

As you may have suspected (or read in the past, if you follow this blog,) "Mayhem" follows the story of Maggi's adopted daughter, Margaret, better known as Lady Mayhem. Two decades have passed since Maggi Lopez died, and the world of the Collapse has changed significantly. City-states have rebuilt, created a new way of life, and restored civilization as far as technology and magic will allow. Much of the story focuses on House Owens, unfolding in pre-Collapse Stockton. You're going to get a very vivid image of this rich and thrilling world, what it looks like like, what it smells like, and how it sounds. Cultures have evolved and changed, and there's zero loyalty for what the world once was, only what it can be. "Mayhem" is ultimately the story of someone who's tired of serving the dreams of others, and is willing to stop at nothing to create her own dreams. I think that's fundamentally a very familiar concept for all of us, a challenge that we all struggle with each day. No matter how alien our world becomes in the Collapse universe, or what otherworldly powers are wielded by gods or witches, the core human struggle does not change. We are our worst enemies, we create the worst demons for ourselves, and our desires and lusts hold us, hostage, as often as they empower us.

Margaret is a character I'm very fond of, and I think you'll enjoy meeting her. Stay tuned for "Mayhem" updates as 2018 wears on. I'll be working hard to get you a finished novel, along with Athena Driscoll & Kristen Walls Kearney.
By Michael Molisani at September 12, 2018