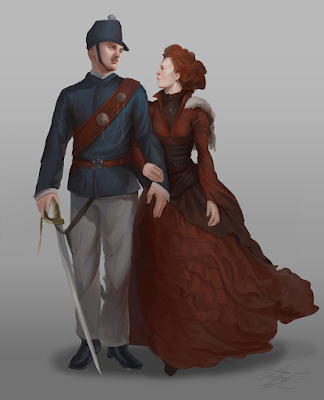 "Why are you talking about new works when The Bruja is just now hitting bookshelves ?"

The artwork here was completed this morning by Polish superstar RinRinDaishi (this her name on DeviantArt if you'd like to look up her other work,) and is a constant reminder of why I love to work with other artists.

Mayhem, the sequel to The Bruja takes place roughly 20 years after the events that unfold around Maggi Lopez. Her adopted daughter, Margaret, takes a key role in the brave new world that Maggi helped create.

You'll learn more about this tale another day. For now, however, I'd love to talk to you about how digital and conventional painters have helped grow and evolve the world that takes place in my imagination.

I'm a very character-driven author. I like to create three-dimensional individuals for you enjoy. In doing this, quite often, I brush over physical details because they're less important to a narrative. Often my details are filled in by artists like RinRinDaishi, NanFe, or Bella or SapFire. These artists not only create their own details but alter mine in ways I had never imagined. A great example of that is Lady Mayhem herself.

In original drafts, Seeking the Elephant (the first title for The Bruja,) Margaret was a very superficial character who showed up briefly to illustrate Maggi's matronly role as a mother & teacher. By the final edits of The Bruja, Margaret had evolved so completely, developed so drastically, that she now warranted a physical description. She was initially a brunette, based on her real-world visual inspiration. However, when RinRinDaishi first brought Lady Mayhem to life, she visualized her as a pale red-head. I was so enamored with this creative license that I absolutely knew Margaret now had red hair. One of the final edits I made to The Bruja before it went to publication was changing this detail so continuity would match the sequel. I recommend every aspiring author work as a visual artist. Don't be so in love with your universe that you won't listen another's vision! Your work can only become richer, more robust, with stylistic influences.
By Michael Molisani at January 12, 2018