Origins of The Bruja 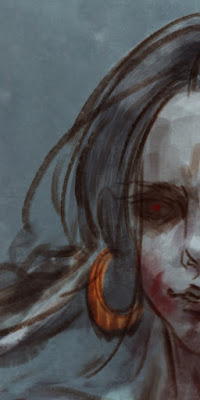 Although I've been writing since I was a child, about 10 or 11 years old, I was never serious. It was something I casually did to relax, or to expand on ideas in my head. It was a hobby for which I sometimes dedicated weeks - or I completely ignored.

In 2008 (a decade ago now,) I decided to get serious. I made a decision that I wanted to start storytelling and creating real literature in a meaningful way. I began to tinker with an old desktop computer after I got home from work before my ex-wife returned. I started to create short stories, little vignettes. Some of those I finished, others I did not. I never dared try to publish, I was terrified of how the work would be perceived. Was it a good story? How were my spelling and grammar? Did I edit it enough? Is this something that anyone would care about?

After careful consideration, I began to study the craft of writing. I wanted to know more, so I dove directly into research. By November of that last year, I challenged myself to complete NaNoWriMo. For those unfamiliar, National Novel Writing Month is a web project started in 1999, intended to inspire would-be novelists to get up off their butts and do something. You have 30 days in November to complete 50,000 words. It was hard work, I wasn't used to that kind of marathon writing, 50,000 words was no joke and I ended up cheating. Wait, how do you cheat on NaNoWriMo?

I had created a post-apocalyptic tale about a woman named Maggi. Unable to keep up with my word count, I began to borrow chapters from another book I had started earlier that year, a classic fic-lit tale set in present-day Redwood City, California. I cheated by forcing my future narrative to flashback on a past narrative. The end product was 50,000 pages and was also mostly crap.

Problem was, I liked this lady, Maggi Lopez. I liked her voice, her tone, her character. I liked this woman who defied reason. She's essentially an East L.A. chola who can wield magic. She's our crucible, our wizard, our defining example of wisdom; yet she's rough on the edges, caustic and not the kind of person you might look up to.

Early that following year I began work in earnest on a new book called Seeking the Elephant. (If you'd like to know what that phrase means, go read The Bruja, today!) This story was more fleshed out, Maggi became more complex, the world of the Collapse now had rules and structure. And those old "flashbacks?" They became some of my memories of being a young rivethead in Bay Area. For those of you wondering, "rivetheads" are basically "goths" who read too much history and like to stomp.

With this second incarnation finished, I would end up re-writing the story, start to finish, several more times for the next few years. Somewhere around 2012, however, I took a break and walked away from this world I had created. It wasn't until 2015 that I returned. For the next four years, I ripped the story apart, again and again, and few more times. Seeking the Elephant became The Bruja. Many aspects changed. The Beast became a less important part of the narrative. Mayy's role in Maggi's life expanded. Maggi's bisexuality and her difficulty accepting it was now part of her mythology. I cut and cut, and thinned each and every page until what had once been 200,000 words was now the sleak, lithe 288 pages you hold in your hand.

I have no regrets. The years I spent working on The Bruja didn't make a better book, it made me a better writer. The version of the story available on Amazon is simply the best incarnation I produced. I hope you will enjoy it!