"The Bruja" Was Never Intended to be a Stand-Alone 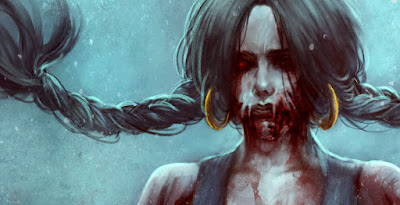 If you read all the way to "The Bruja's" final page (well I hope you did!) you'll notice the promise of a sequel. That's a promise I will be keeping in 2018. The universe of The Collapse is rich and deeply flavored. There are no grand epics to be found here, no White Walkers or Eye of Sauron. There are, however, stories to be told about people. People surviving the end of the world. Adapting, and rebuilding civilization. Learning to live with ghosts, gods, and magic. Some people will want power, others will want to protect the weak. Many may still be driven mad, and those who just want to be loved. What happens in that world? Why does it happen? Well, come along for this adventures with me, and I promise to show you. There is no trilogy, no collection. There is only a world you can immerse yourself in. There is a timeline, and some folks will change that timeline. Or, maybe they don't. Perhaps they perish on their journey or even become gods themselves.

This is The Collapse. A world of untold beauty and fathomless nightmares. This is where wonder and horror meet. Here's what you can expect.

Early 2018: I will be partnering with author Melissa Johnson to bring you a handful of short stories from the shadows of The Collapse. These stories will be free, and available for download from MichaelMolisani.com -- "The Dread Harvester" will be the first and should drop sometime around April or May for your reading pleasure.

Late 2018: "Mayhem" will be published for e-book & softcover from retailers like Amazon. "Mayhem" follows Maggi's apprentice and adopted-daughter, Margaret as she attempts to thwart the manipulation of gods and man. Her best allies and worst enemies may be the twin granddaughters of Maggi Lopez, Amihan & Ramona. The future of the Antecedent Empire & House Owens rests in her very small hands.

Mid 2019: Melissa Johnson & I are going to be releasing a short-story anthology from the world of The Collapse, again from retailers like Amazon. This project is unnamed as of yet, but I am thrilled to be working with Melissa. I've known her for years and she is an incredibly talented author. This collaboration is a dream come true anyone who's a fan of great writing. The anthology will cover different eras of The Collapse and will include the fiction we're releasing this spring.

Late 2020: "Century Witch." Remember that title. This is the juggernaut I'm most proud of, and probably the best fiction I have ever written. I toyed with releasing this book first, rather than the "The Bruja," but I believed ardently that every tale should start at the beginning. This is not the end of our adventure, but rather the end of our prologue. "Century Witch" will destroy every notion you have about horror & fantasy, and it will go above and beyond the notion of a book. I can't wait to share this with you all.

These dates will be maintained as best as I can. I have a day job that pays the bills (writing does not!) and I need to maneuver around that. I also will be working with content & copy editors, publishers, artists, and illustrators. We'll do our best to keep on schedule and not go full George R. R. Martin on you.

In the meantime, I hope you enjoy "The Bruja." If you haven't already purchased a copy, its currently on sale for $3.03 on Amazon!
By Michael Molisani at February 20, 2018