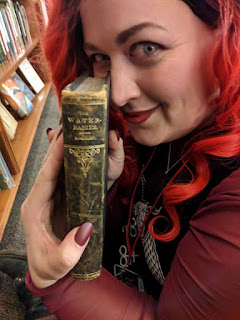 When you think of the word "horror," and its connotations in fiction, you're probably thinking of slasher flicks or monster tropes. Maybe, you think of classic authors like Poe or Lovecraft. Maybe you even remember old Hammer films with actors like Ralph Bates or Christopher Lee.

I don't think you commonly imagine the horrors that you may face at any moment, on any given day.

To the left, pictured, is my best friend Athena Driscoll. She's the craftswoman behind Leanans' Boon, and in 2016 she did a books-on-tape recording of "The Bruja" in its original form, that you can enjoy on Youtube. She also acted as content editor for "The Bruja," and is partially the inspiration for Maggi's friend Aubriana. If you've read "The Bruja" by now, you know that Maggi betrays her friend and leaves Aubriana to die during the first days of the Collapse. If you haven't read "The Bruja," I just spoiled it for you and I feel no guilt whatsoever.

What you probably don't know: this was also inspired by real-life events. Several years ago Athena was diagnosed as pre-diabetic and advised to alter her diet. She did so. Unfortunately, her urgent care clinic only gave her half the story. That same diet she assumed would end up almost ending her life and condemn her to a diabetic coma that she would not wake from for weeks. Obviously, "alls well that ends well," she's alive & healthy today -- as healthy as any type-2 diabetic can be; constantly facing down death, each day.

When she shared those memories with me I was genuinely haunted. For days, even weeks after, I found myself genuinely transfixed and rattled. I was far too able to empathize, to visualize, what she had experienced. The idea of being trapped in a body that doesn't function, while the world goes on and speaks of you in the past-tense made me ill to my stomach. Worse, her accounting of various altered states of mind she would enter, beyond her control, gave me nightmares. This was, for me, real horror. Jason and his machete had nothing on this. I would rather face all the awful boogeymen the imagination can offer than experience a trauma similar to this coma.

So, naturally, I needed to write about this. A lot of what I write is trauma, let's be honest.

In "The Bruja" it was a perfect fit. The core of the narrative will always be driven by internalized horror. Just as Aubriana suffers a fate worse than death, so too does Maggi when she's forced to confront her failures, her cowardice. The Wave Organ scene is more than a "boss fight," its intended to be a literal depiction of hatred & loathing played out, bloody and rife with brutality. That's real horror for me. The ghosts and goblins, that's window dressing. That's just where my mind lives 24 hours a day. The horror of "The Bruja" exists, for me, in the mind's darkest corners, locked away, waiting for a chance to crawl out into the waking world.

I'll be releasing a re-written version of "The Dread Harvester" on this blog, later in February. It will focus more heavily on these aspects, and it'll probably be pretty awful. I mean, it'll be great writing, but you'll probably feel awful after you read it.

Wait, who part me in charge of PR?