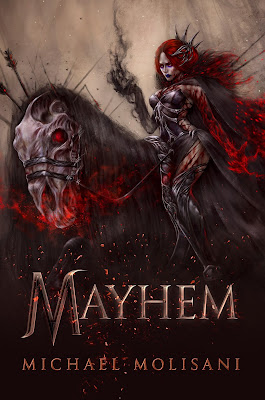 Pre-orders have gone very well, out-selling "The Bruja" by nearly 40% on week one. I also cannot speak highly enough of Amazon's softcover copy of "Mayhem." I know it's expensive ($29.99,) but its honestly worth it - that book is aesthetically gorgeous. The illustrations are, honestly, far better looking in print than I had ever hoped for, and the quality of the paperback is simply flawless. If you keep physical books, I really recommend the softcover. It's worth every penny.

Apocalypse is only a temporary setback.

After the Collapse, chaos swept the world. Cities burned and flesh was sacrificed on an altar of wholesale rage. Out of that bloody and ashen swamp rose new powers. City states and nations adapted to a world where magic is real, ghosts whisper, and ancient gods lust. This is a salacious world, infested with malignity and apotheosis.

The Bruja's adopted daughter lives on. Lady Mayhem, nightmare mirror of the Antecedency. As Mayhem prepares to retire, she is pulled into a gossamer conspiracy of enigmatic gods and flawed mortals. The balance of power twists, shrouding enemies. Mayhem is forced to unravel treacheries and bargains. But first, the Antecedent battlewitch must come to terms with her own monsters. These fearsome creatures do not wear scales or growl in shadow, however. They are creations of the Collapse, trauma beyond imagination.

In this highly anticipated sequel to 2018's breakout hit, "The Bruja," Michael Molisani returns you to the Collapse with a riveting tale of horror, intrigue, and lascivious brutality.
By Michael Molisani at April 13, 2019